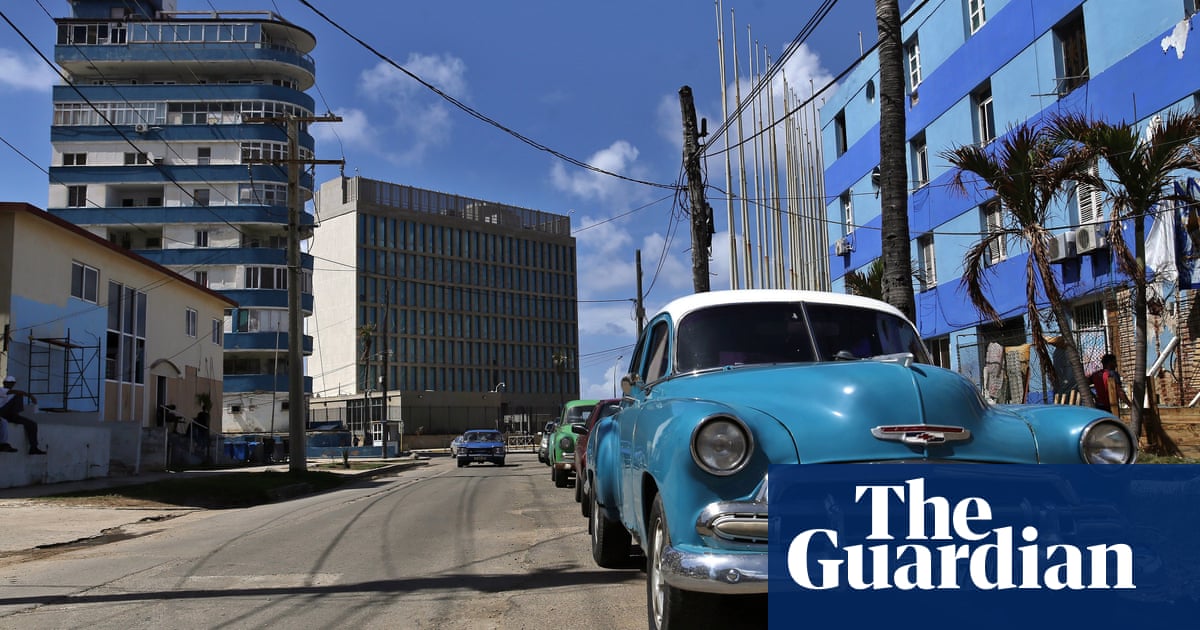 Official emails and diplomatic telegrams marked as sensitive reveal for the first time how the British government scrambled to understand a series of alleged sonic attacks on US diplomats who became ill in mysterious circumstances while on duty in Cuba.

The US government ordered all non-essential staff at its embassy in Havana to return home after dozens of diplomats and family members developed headaches, dizziness and problems with balance, concentration and sleeping in a wave of illness that struck between 2016 and 2018.

Many reported falling ill in their homes or hotels after hearing penetrating sounds, described variously as grinding, buffeting or cicada-like chirps. The case reports fuelled speculation that the diplomats had been targeted with an acoustic weapon or some other novel device. No evidence of any such attack has been found.

The events prompted a dramatic breakdown in relations between the US and Cuba less than two years after Barack Obama had sought to reestablish normal diplomatic ties between the nations.

Documents released to the Guardian under the Freedom of Information Act shed light on how the British embassy in Havana and senior Foreign Office staff in London desperately sought to make sense of the unfolding events.

Though most are heavily redacted on grounds of national security and international relations, they show how staff pored over press reports, official statements and other communications to understand a situation that one overnight update from August 2017 said was being presented by the media as a bizarre cold war-style confrontation.

The update, copied to Anthony Stokes, the British ambassador to Cuba, noted that the press broadly buy the veracity of a Cuban statement that declared it had no involvement in the affair, and were now asking: If it wasnt the Cubans who did it, who did?

On the same day the update was sent, a brief for Alan Duncan, then minister of state for Europe and the Americas, described the continued fallout from the apparent sonic attacks. In response to the then US secretary of state, Rex Tillerson, declaring he might close the embassy in Havana, Cubas foreign minister, Bruno Rodriguez, called Tillerson directly to state he had no knowledge of the source and express his determination to protect diplomats.

Two months later a diplomatic telegram sent from Havana to London, marked as sensitive, described the expulsion of nearly all Cuban diplomats from the US and the withdrawal of roughly two-thirds of US diplomats from Havana.

Both the US and the Cuban embassies will now be neutered, just two years after reopening, the telegram pointed out. The same telegram described Rodriguez as combative in tone and delivery during a press conference held within hours of the US announcement to expel the Cuban diplomats, and said he stopped just short of accusing the US of making it all up.

Further correspondence between British officials in London and Cuba suggests they had no fresh insight into what happened to the diplomats. Over a number of months they shared media reports that the strange sounds were caused by crickets, and that the wave of illness might be psychosomatic and triggered by the stressful conditions under which the diplomats operated.

The FCO released the emails and telegrams, spanning from June 2016 to June 2018, after the Information Commissioners Office said the department may be held in contempt of court if it failed to comply with the Guardians request. Some of the documents were completely blacked out.

More than two years after the diplomats fell ill, doctors are still no clearer about what happened. Two US medical studies that assessed some of thse affected found they had concussion-like symptoms and possible brain abnormalities, but independent medical specialists have criticised both studies. In a recent report that has not yet been peer-reviewed, Canadian scientists suggest excessive fumigation with pesticides to keep mosquitoes under control may be to blame.

Mitchell Valds-Sosa, the director of the Cuban Centre for Neurosciences, who was part of a Cuban investigation into the incidents, said that without more data it was difficult to draw any firm conclusions.

But I am very sure what did not happen, he said. There is absolutely no evidence for a mysterious weapon causing a new syndrome characterised by brain damage and much less inner ear damage.

Some diplomats may be ill due to natural causes, and we have not yet tested the idea of insecticides causing intoxication in some cases, but the results of what has been published tells us that there is no homogenous set of symptoms or lab findings.

And whatever has been found overlaps very much with several frequent medical conditions. The only common factor in most cases is a government telling employees they were attacked, and a media barrage that has largely reinforced this idea.