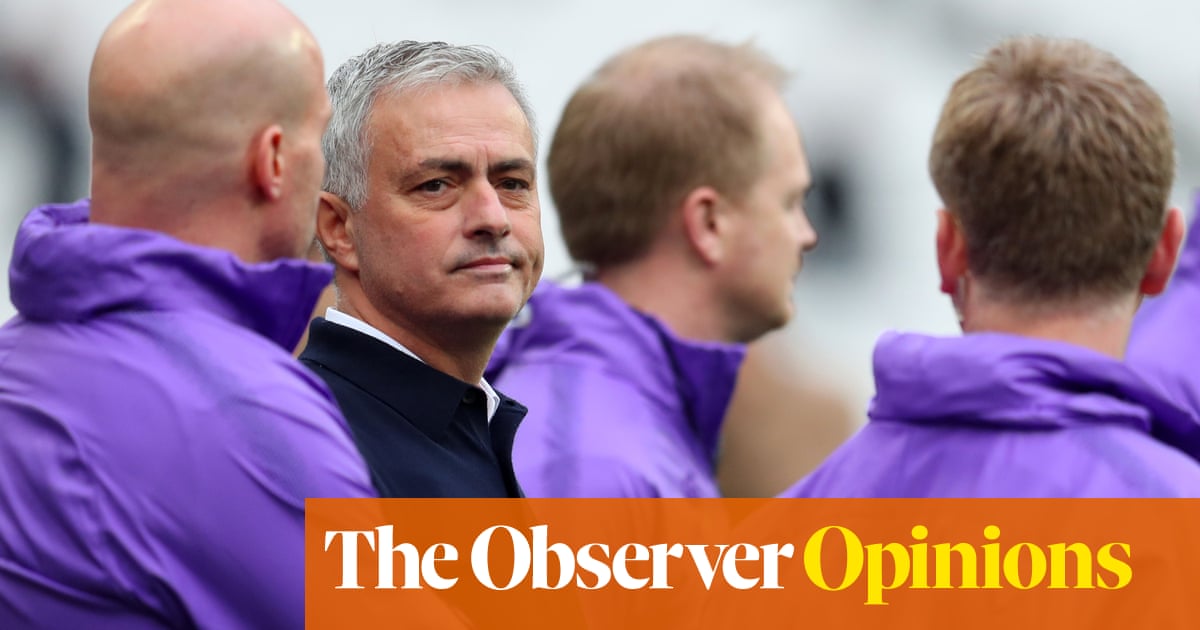 Jos Mourinho says he will not make the same mistakes at Tottenham that he made at some of his previous clubs and, though naturally he is not about to reveal what those mistakes were, it is safe to assume Alexis Snchez will not be reappearing in north London any time soon.

The unlikely Mourinho admission that he spent the first two days of his new job smiling may give some sort of clue. Not only must a fat new contract and players of the calibre of Harry Kane and Son Heung-min to work with give him plenty to smile about. It must have entered his consciousness somewhere along the line that he developed a reputation for scowling in his last job and everyone at Manchester United was quite relieved to see the back of him.

Though Mourinho does short-tempered and sardonic very well, in his heart of hearts he is probably too vain to want to spend the rest of his career being disliked. One imagines he would be quite in favour of a little of the respect he used to command as an undisputed coaching genius returning at some point, and in that respect he has given himself something of a mountain to climb at Spurs, where the popularity of Mauricio Pochettino among supporters and critics was in danger of reaching cultish proportions. Rarely in the Premier League can such an affable and amenable manager have been replaced so swiftly by one more associated with sneers and sarcasm, which was why Mourinhos appointment, rather more than Pochettinos dismissal, was greeted by a wave of negative reaction and grave doubts about his ability to see out his contract.

It has been rightly pointed out that Daniel Levy and his new manager appear to be poles apart in their approaches to team-building and strengthening, and one or other of the immovable objects will have to give a little if even the end of the current season is to be reached in harmony. But, if Mourinho has any of the magic dust left over from his most impressive incarnations at Porto, Chelsea and Internazionale, he can change present perceptions of his usefulness at a stroke.

All it would take is a trophy, the weakness in Pochettinos otherwise impressive CV, and most of the reservations about Mourinho would be swept away. Given the amount of silverware the former Real Madrid manager has already accumulated, that would not appear to be too outlandish a request, even if Spurs have been slumming it in the bottom half of the Premier League table, rising to ninth with Saturdays win at West Ham.

Pochettinos side were beaten in the Carabao Cup on penalties by Colchester, perhaps one of the factors that accelerated the Argentinians demise, so people have been assuming over the past few days that Mourinhos eyes must be firmly fixed on the FA Cup. A side that can reach a Champions League final can surely get its act together for a now minor domestic knockout competition, after all, yet it must also have occurred to Mourinho that a side capable of reaching last seasons Champions League final, disposing of Manchester City, Ajax and Borussia Dortmund en route, can probably make it to another one.

Yes, that might be difficult if the current disaffected attitude of certain senior players remains, but the other side of that coin is that all the ingredients of last seasons near-success are still there, even if some of them are winding down their contracts. If Mourinho can inspire the sort of dutiful dedication that led Inter to win the first Italian treble after years in the doldrums, anything is possible. No one doubts the quality at Spurs and, though Mourinhos continuing ability to galvanise teams and outsmart opponents tactically is more debatable, there is an opportunity on offer here that both parties must recognise might be fleeting.

In his last job Mourinho was tasked with getting a side into the Champions League. Now he is in charge of one already in that bracket and, though results have been uneven, Spurs look a good bet for the knockout stages as they prepare to host Olympiakos on Tuesday. Never mind the issues within the squad and the fact the domestic title looks as far away as ever. That is bound to excite a coach who is one of a group of just five to win the European Cup with two clubs. Only two of those are still working Carlo Ancelotti is the other and it would thrill Mourinho enormously to go out on his own as the first manager in history to record European Cup triumphs with three different clubs from three different countries. That, one would guess, would be a mark on posterity that might last some considerable time and, for all the talk of a man now interested in only short contracts and big payoffs, he has reappeared in a situation that makes it possible.

The elephant-sized question is whether he still possesses the ability to win matches against top opponents through force of personality and rigid discipline on the pitch, when the evidence of the past few years suggests his methods have been rendered obsolete by the pressing games favoured by Pep Guardiola and Jrgen Klopp. We may shortly find out, though a coach with Mourinhos record surely deserved better than to be dubbed a luxury version of Sam Allardyce.

The Portugueses last Champions League success was in 2010, though before accepting the commonly held theory that Mourinhos golden years are behind him, have a closer look at some of those other double European Cup winners. Ottmar Hitzfeld was 52 when he won his second, Ernst Happel was 57 and Jupp Heynckes a remarkable 67. Mourinho is 56 and possibly not ready to start winding down just yet.